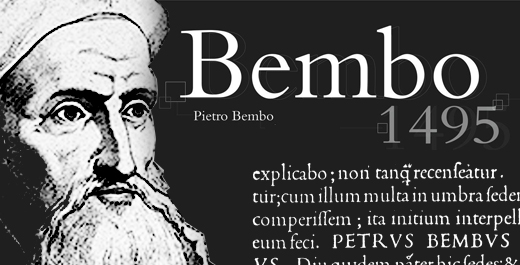 Discover the Centuries Old Fonts You are Still Using Today

Some fonts are timeless in the way they look. They have weathered the test of time because they reflect a lost age of craftsmen in which fonts were hand-crafted with meticulous precision and artistry.

The following fonts are close derivations of the original punch cut letterforms and print press font styles that fed printing presses in the 14th Century and beyond. When you next use these fonts, I hope they give you the added sense of tradition and history that these beautiful letters bring to your designs and messages.

Possibly the oldest book font in predominant use today, it is an adaptation of the Roman style font that was originally cut and cast by Venetian printer Francesco Griffo for use on famed scholar, Pietro Bembo’s poetry book. It is the font that launched a thousand fonts with Cloister Old Style, Minion, and a host of other fonts that have recreated its classic beauty and form.

As apprentice to Aldus Manutius, the inventor of italic type and of pioneer of book publishing, Francesco carved his own name in the typographic history books with this font that was recreated by Stanley Morison for the Monotype Corporation in 1929.

It is without doubt that the Roman letterforms that Aldus Manutius and Francesco Griffo developed in the 1500’s were critical in the development of modern text and letterform.

Why has Bembo lasted the test of time?

Bembo represents classic lines and typographic elegance. It is the perfect choice for expressing classic beauty or formal tradition in typographical design. It’s tall and confident lines add a timeless sophistication to your designs and messages.

Claude Garamond made a name for himself by creating commissioned fonts for King Francis I and the French court in the 1540’s. His Roman typefaces were used for printing and publishing across France and Western Europe, and were considered very contemporary and modern.

When Claude Garamond died in 1561, his punches and matrices (the print press originals of his typefaces) were used to create the Garamond font as we know it that became the house style of the Royal Printing office in France and has lived on as one of the most popular fonts ever conceived.

Why has Garamond lasted the test of time?

The book face font is so smooth with a touch of artistic curvature. Unlike its more modern and somewhat inferior counterparts, there are no harsh angular cuts in it. As serif fonts go, it’s one of the most beautiful, with its curved drops and crisp but slightly rounded edges, and being a touch condensed, it has a friendly ease to it that can communicate this same sense of ease when using it for your designs and messages.

The Bodoni font is a series of typefaces designed by Italian printer and typesetter, Giambattista Bodoni. His font design represented a huge leap forward in typography, a transitional font style that took less inspiration from Roman and Greek style fonts than ever before.

At his print foundry, his printed pages were almost devoid of decoration and contained modern typefaces of his own design. He was designing for a new and modern age of Napoleonic revolution and change. His font that had simplified lines and curves, lost none of the elegance of its Roman predecessors.

The modern adaptation of this font was based on the font designs and principles of his hugely influential Manuale Tipografico of 1818.

Why has Bodoni lasted the test of time?

Bodoni has always been a font that was way ahead of its time. Centuries later in the roaring 30’s age of art deco beauty and fashion, the Bodoni font became an essential design choice because of its simple sophistication of flat, un-bracketed serifs, and extreme contrast between thick and thin strokes. It is a tall and handsome font that has masculine strength and feminine beauty.

It’s still such a popular choice for designers today when expressing ideas of fashion, luxury, and charm. 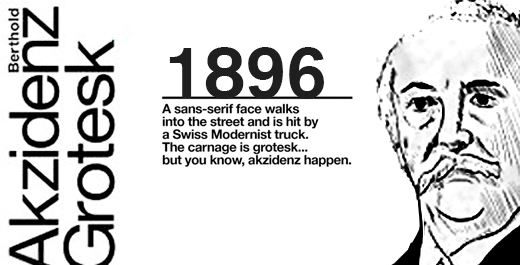 Granted, this is a later font that is little more than a century old, but it represents one of the original san serif fonts and therefore was important to mention as a milestone in typography. What’s more, it still looks contemporary and modern today, and has had countless copycats that never seem to come close to its simple sophistication.

Hermann Berthold was a print pioneer in an age of great change as far as printing and graphics are concerned. Using his revolutionary diatronic phototypesetting machine, he developed fonts and text to work with his matrix plate printing system. The modern version of the font is attributed to designer Günter Gerhard Lange who was the Berthold Foundry’s artistic director and font genius.

Akzidenz Grotesk is his most enduring font of the Berthold typesetting systems. It pre-dates by half a century the enormously popular neo-grotesque fonts such as Helvetica.

Why has Akzidenz Grotesk lasted the test of time?

In Akzidenz Grotesk we can see the origin of san serif typefaces. But what makes this font so special is its ability to stay forever modern and contemporary in contrast to some of the other 20th Century san serif fonts that fell by the wayside. More elegant than its modern counterpart, Helvetica, its clean geometry gives it a stark and bold appeal that advertisers and designers have taken advantage of for a century.