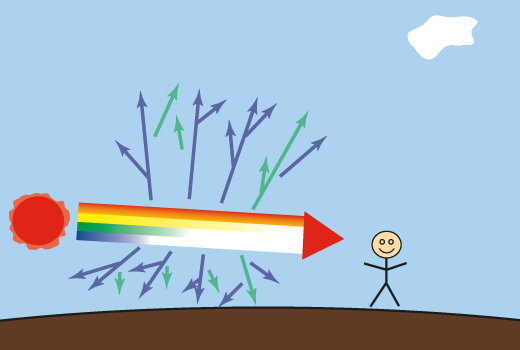 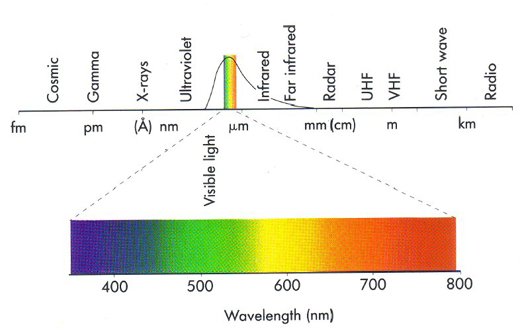 As you see above, the insert between Infrared and Ultraviolet wavelengths resides in the tiny visible light spectrum. (Roughly between 380 nm and 780 nm). When the whole visible spectrum is viewed, it is perceived as white.

Light is a WAVE!

Light is a PARTICLE!

Ultimately it was determined that BOTH sides were correct. Light behaved as both wavelength and particle. Ecstatic with the realization, the phenomena was named with a lofty, difficult to pronounce term: Wavicle!

Light wavicles are referred to as photons. Throw a party streamer at the person next to you. (If arrested for said thrown streamer, NextDayFlyers denies any involvement of said thrown streamer). The streamer projects out to the direction thrown and bounces off the intended victim…errr… test subject. As it unwraps, memory in the roll causes the stream to be wavy. It is a WAVICLE!

Throw the streamer with greater strength and the victim… subject can bruise. (don’t ask me how I know, theoretical only). Increasing the energy in the photon can cause the same effect. It overwhelms intake and can cause damage.

“If sunlight emitted from the sun contains the entire visible spectrum and the entire spectrum is perceived as white, why is the sun yellow in our sky?”

The sun is yellow because the sky is blue.

The sun is white in space. When NASA shows images of sunlight falling on astronauts working in space, they are illuminated in white light. The background space remains black. It is due to the entire visible spectrum shining on the object, and no part of the spectrum being diffuse or reflected off before reaching the object.

When sunlight enters the earth’s atmosphere, the gaseous makeup of the atmosphere diffuses the blue portion of the spectrum and sends it out into various directions. The remaining portion of sunlight minus the blue spectrum, smaller wavelength photons, is perceived as yellow. The blue spectrum is split off multiple times in various directions illuminating our gaseous atmosphere to the color blue. We live in a giant fluorescent bulb.

As the remaining sunlight travels closer to the observer, less blue is left to be diffused off. As we look to the horizon, the blue becomes lighter and paler due to less blue spectrum at ground level. The remainder of the spectrum appears yellow to the observer.

As the sun sets, sunlight travels through more of the atmosphere to reach the observer due to the angle the light enters the earth to the observer. Coupled with particles in the air, whether naturally occurring or manmade pollution, sunlight diffuses more of shorter wavelength photons from blue and green wavelengths. Particles absorb other wavelengths and reflect the red spectrum, thus illuminating the sky around the sun red. 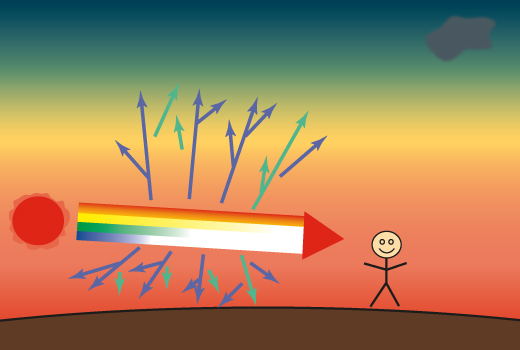 Knowing the light source and the color wavelengths it consists of, allows a designer to predict the perceived color off a design – in other words, how it will be seen.

Stay tuned for the next installment… “Object’s colorants”.

Sorry. No data so far.