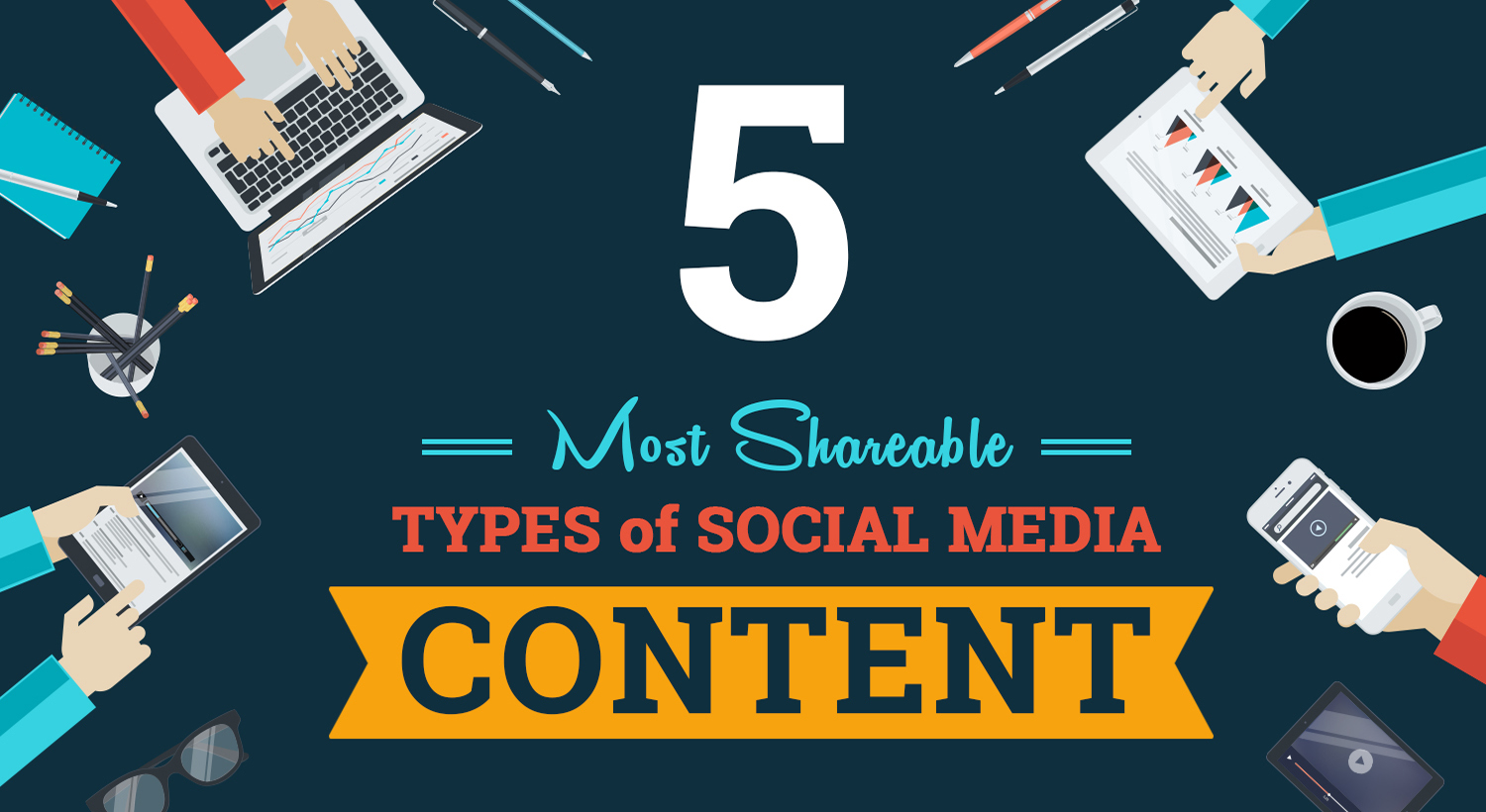 Not all social media content is created equal. Some have just a few people engaged while others might break into the viral realm. Even then, a lot of factors affect the way people react to content.

So what types of posts should you use for your social media plan?

There is a lot of research on the internet about which type of content you should post. To make your social media strategy easier, we’ve done the work for you. Here are the 5 most shareable social media content types backed by research in one nifty infographic.

Click the photo for a bigger image. Check out the more detailed explanation after the photo. 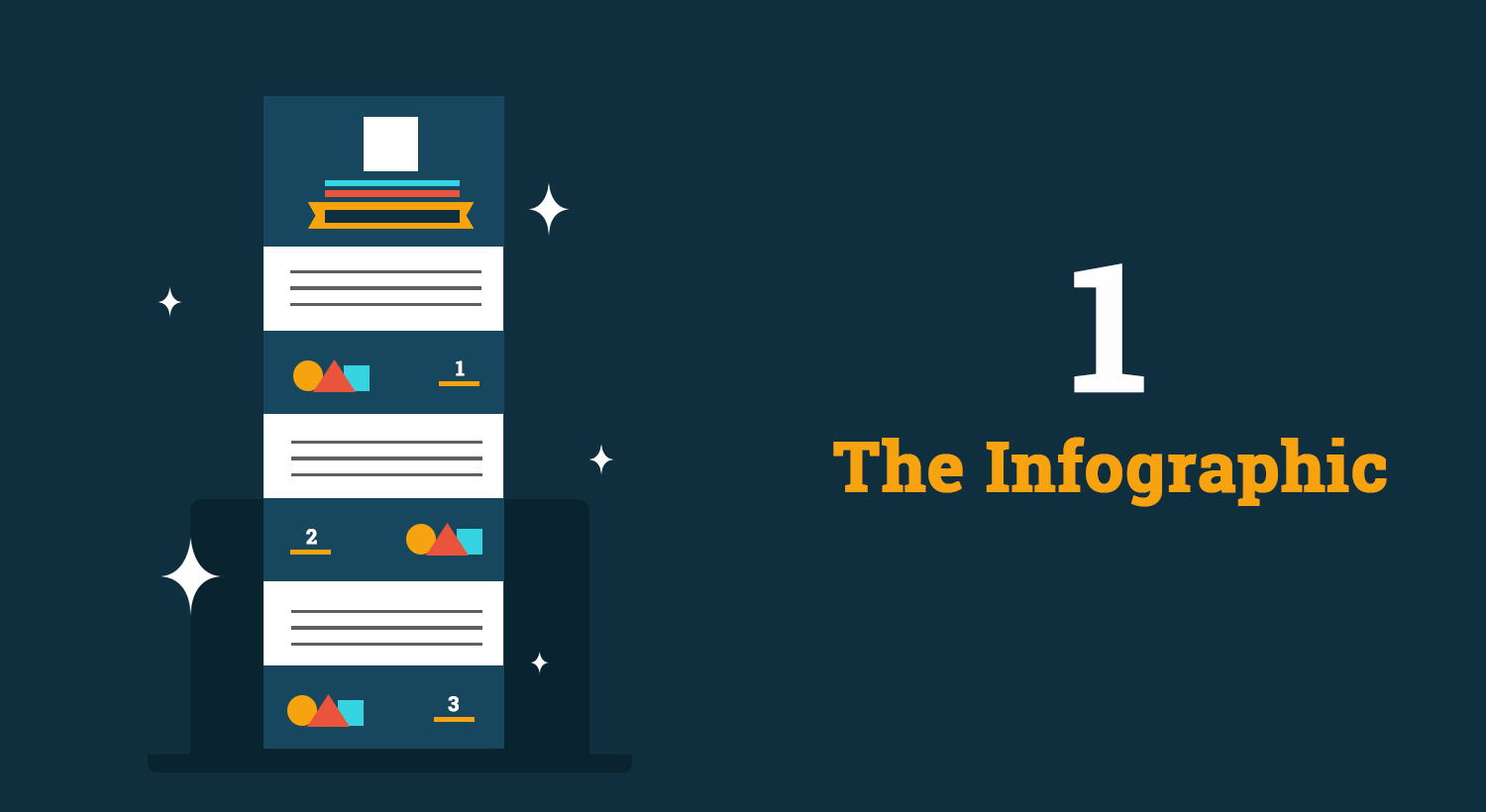 Humans are visual creatures. A lot of the information that we process comes from our sense of sight. But with thousands upon thousands of pieces of data generated by the human race every minute, added to the speed of information sharing brought about by the internet, we need to mold this information into an understandable and workable format.

We currently receive more than 5x the information every day compared to 1986. In a study conducted by the University of California in San Diego, the average American consumes around 34 GB of data per day outside of work. The end result is we suffer from information overload.

The solution is the infographic. In research conducted by OkDork and BuzzSumo on social media content, the infographic topped the list of content with the highest averages shares, with a few thousand shares shy of 15,000.

The effectiveness of the infographic lies deep in human psychology. As I’ve mentioned, we rely heavily on visual information. Research on the persuasive properties of color found out that color in illustrations increased a reader’s willingness to read by 80% and attention span by 82%.

Another research from Wharton School of Business revealed that information presented in both visual and verbal forms persuaded 67% of its audience compared to only 50% persuaded by verbal presentation alone.

While the infographic may be the most shared social media content type, it is also harder to pull off. A separate analysis of a million articles by Moz found a low number of shares in the infographic posts they analyzed. The top infographics in their sample were shared more than 10,000 times. However, over 50% had zero backlinks and 25% had less than 10 shares in total across all networks.

Moz attributed this curious statistic to a recent trend to turn everything into an infographic leading to many poor pieces of content. It may be easy to transform information into visual format but your design as well as your choices on which information to highlight can greatly affect your post’s shareability. 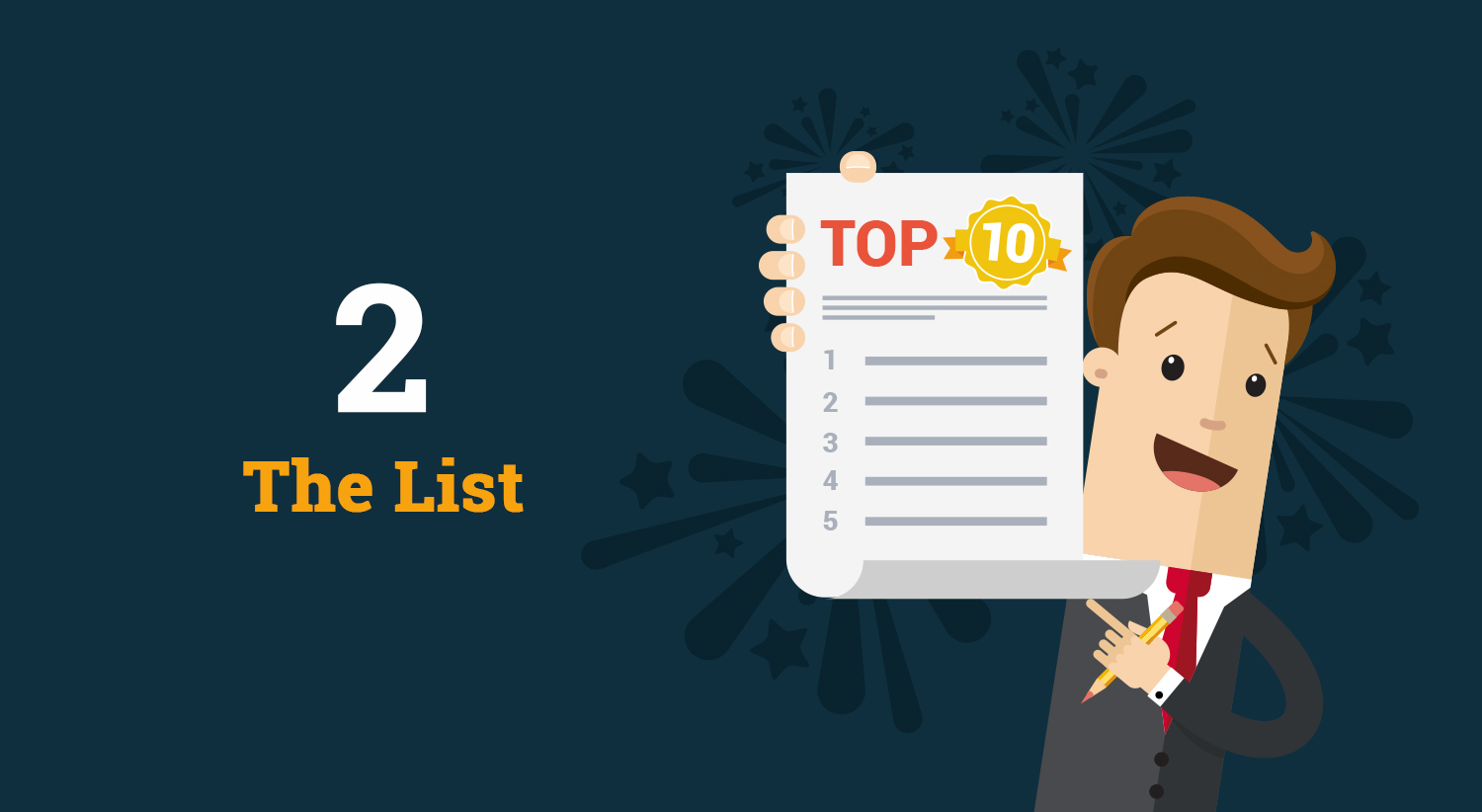 I think OkDork and BuzzSumo’s research pretty much sums things up: “People love sharing lists.” The research found out that the list scored second highest in average shares, a little over 10,000 shares each. A similar research by Hubspot also found the same thing, with lists claiming the most social traction by 22.45% of the total shares within the six-month period of their research. The research by Moz also yielded a similar result, with list articles claiming the top spot at an average of 10,734 shares.

The reason why list posts are one of the most effective social media content types lies in reader expectation. Looking at the article title (case in point, this article you are reading), you already have an exact idea of what to expect. OkDork also cites that the outline form of lists is favorable because it makes them skim-friendly and easy to read.

If you’re going to do a list post, then 10 is the magic number according to OkDork. 10-item lists, on average, received the most social shares at an average of 10,621s. However, an extensive study by social network analyst Gilad Lotan found out that odd-numbered lists also work quite well. Lotan analyzed the content by Buzzfeed, the first thing that comes to mind when it comes to listicles, over the course of three months. Odd number length list posts tend to have higher audience scores on average, with the number 29 scoring highest. 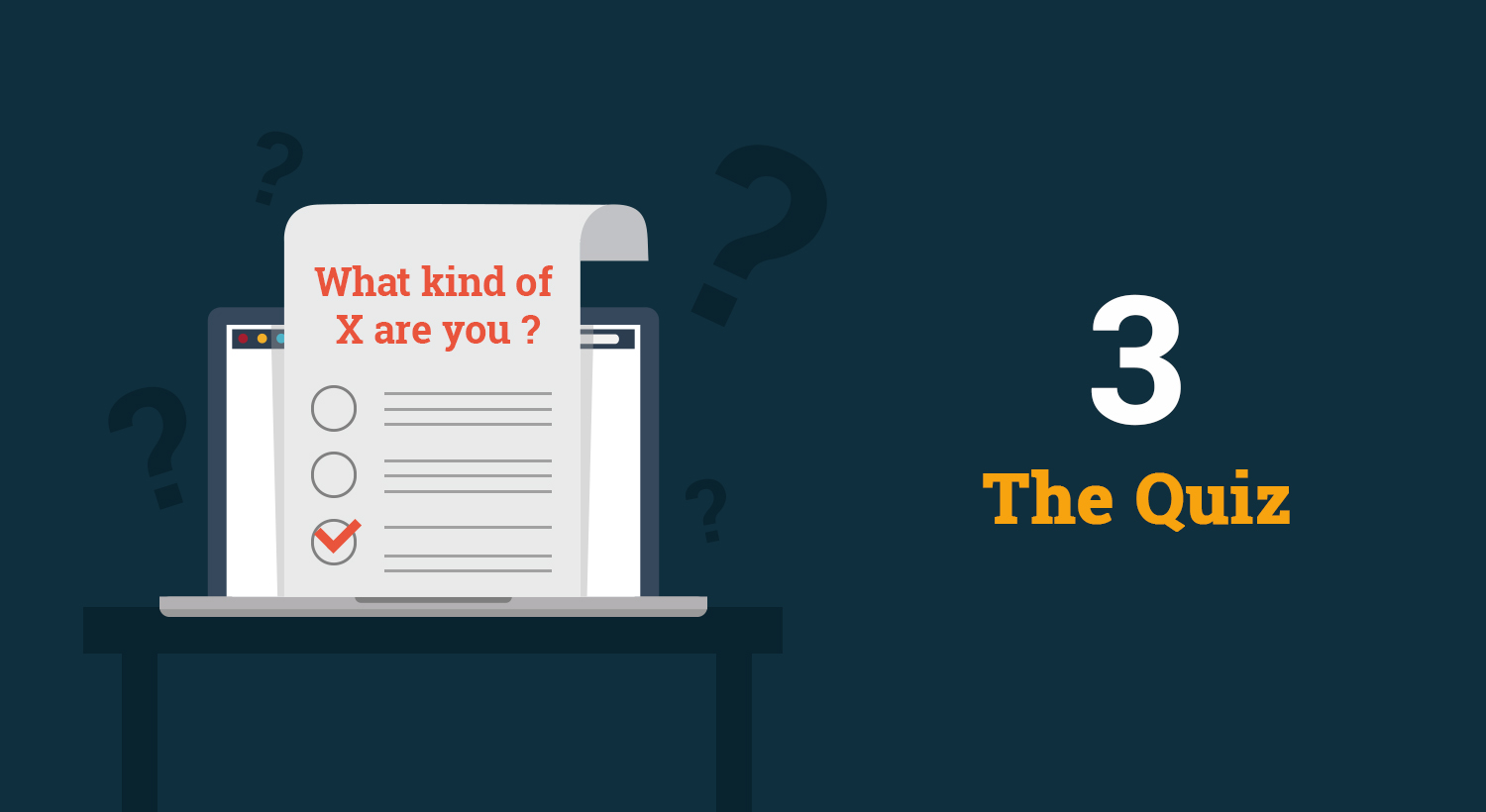 Did you know that in 2013, New York Times’ most popular story was not a news article? It was a quiz entitled How Y’all, Youse and You Guys Talk, a questionnaire that determines your location through your personal dialect. Yes, out of all the news and feature stories made by the news outlet, a quiz topped the list in terms of popularity and shareability. The trend followed in the year 2015, with an article The 36 Questions That Lead to Love dominating the site in terms of shareability. 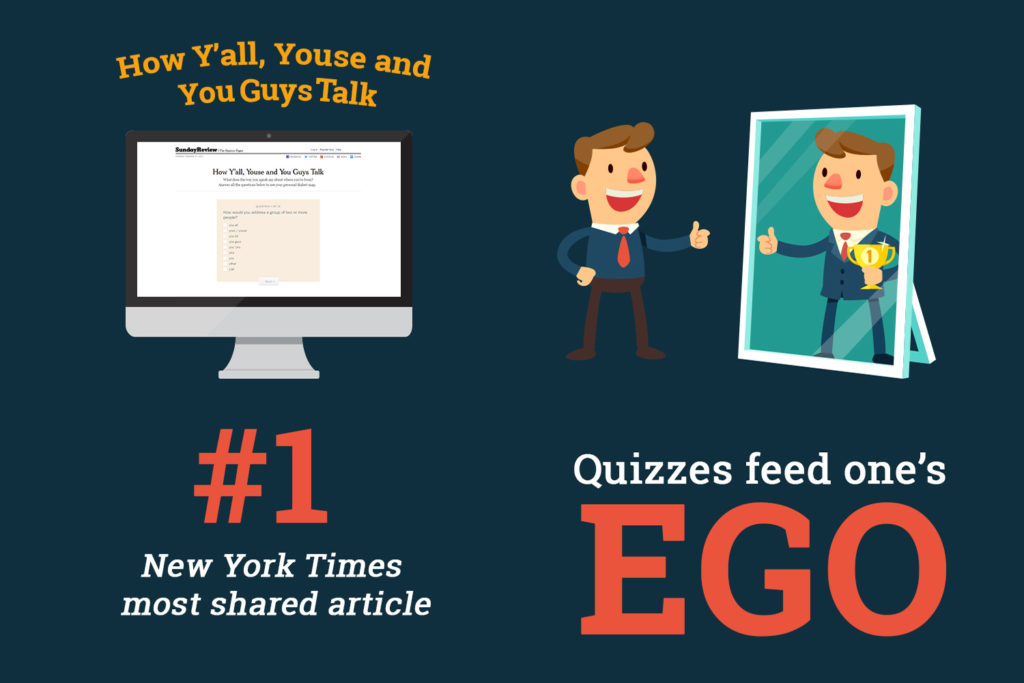 But why does the quiz have a high level of popularity? OkDork and BuzzSumo reveal a simple and selfish reason—it feeds our ego. The quiz earns the third spot solely because it fuels our identity and narcissism. After all, the quiz is not only made to be consumed as most content is. But rather, it makes users do something for a payoff at the end. By sharing quiz results in social media, users show something about themselves, what their tastes are, what they are interested in, or what things they value.

Moz also found a similar result in their research. However, they noted that despite the hundreds of thousands of shares generated by online quizzes, they are rarely linked to by top level domains. 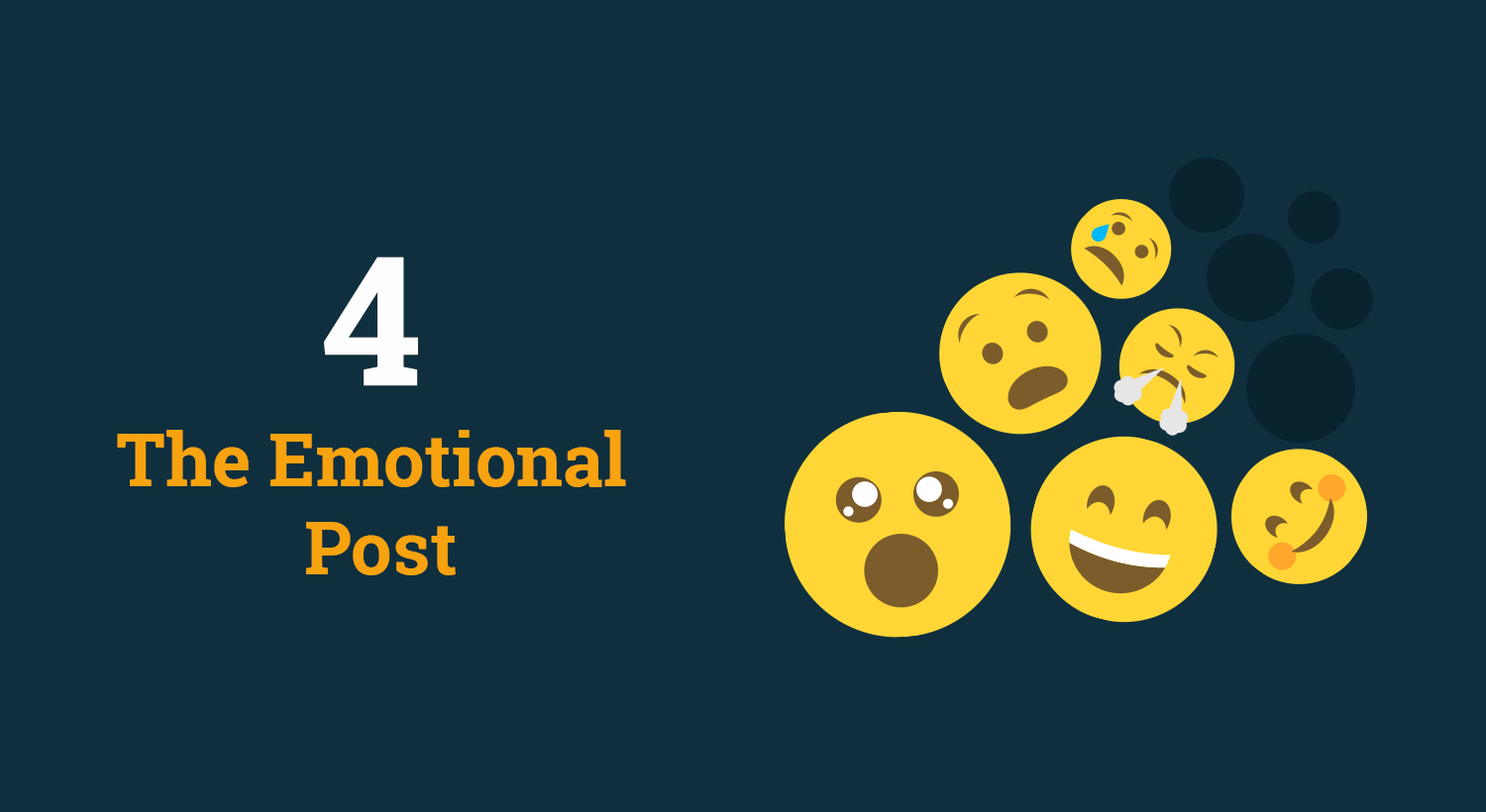 Posts that evoke a strong positive emotion get more shares. In the social media content research by OkDork and Buzzsumo, they broke down the articles by the emotion that each evoked in the reader. The top 3 emotions they found were “awe” at 25% followed by “laughter” at 17% and “amusement” at 15%. All of these are positive emotions. In contrast, the least popular emotions were “sadness” and “anger,” with a combined total of 7%. 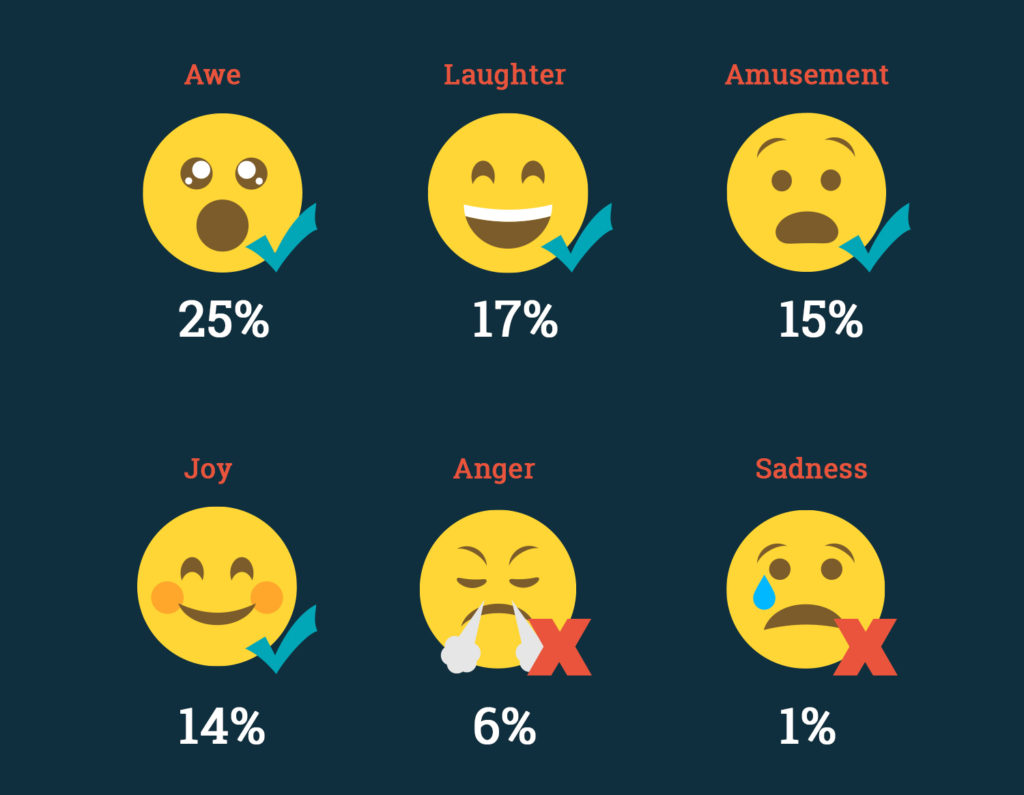 A similar research by Fractl shared through Hubspot yielded the same results, with happiness, surprise, and admiration generating viral hits. The research cited Dove’s successful Real Beauty Sketches. The video featured a forensic scientist sketching a subject’s face based on their own verbal description of themselves. Then it compared that to a stranger’s description. The stranger’s account generated more accurate and far more appealing portraits. The video currently stands at 67 million views in YouTube and generated a lot of marketing studies on the effect of powerful emotional experience.

OkDork listed the primary reasons why people share positive emotional stories: People want to share valuable and entertaining content with others. They also want to define themselves by the things they share and the causes they care about. They want to grow and nourish relationships with their friends.

As a general rule, negative emotions are a no-no when it comes to shareability. However, OkDork noted that while controversial opinions may divide your audience, those who agree with you are more likely to share your content. 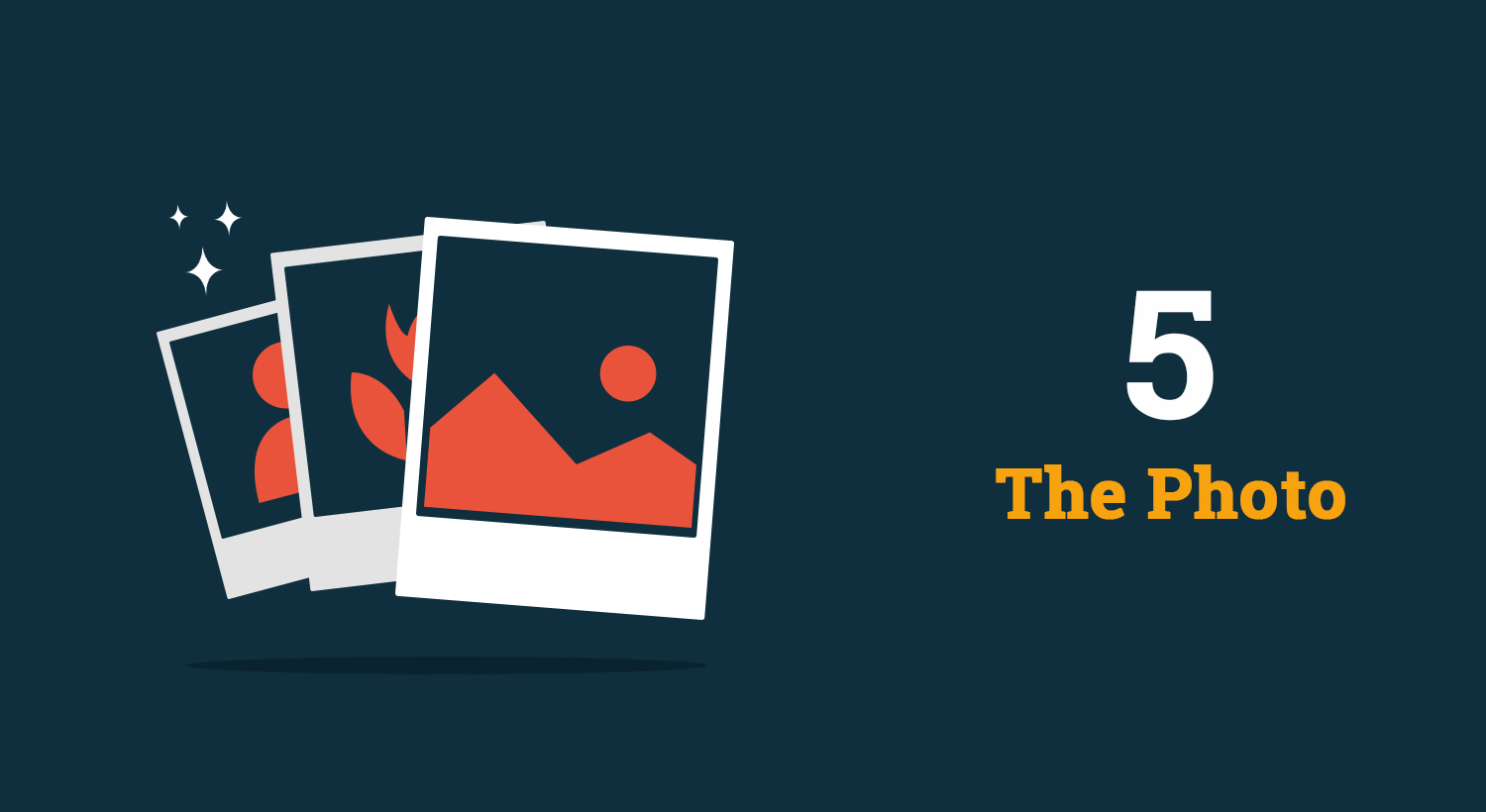 Similar in concept to the infographic, posts with images fare well in terms of shareability. In social media research by OkDork, Facebook posts with at least one image have twice as many shares as posts without an image. Their Twitter research yielded the same result.

On Facebook, HubSpot found out that photos on the social media platform generate 53% more likes than the average post. They also receive 84% more link clicks than a simple text or link post. There is no doubt that users tend to share posts with images more often.

I know that this is a lot of information to take in. But does it mean you should always make infographics for your articles? Should you make odd-numbered lists every day? The answer is not necessarily.

While these are the most shareable social media content types, your shareability still lies in the content itself. No matter how visually appealing or emotional your content is, it won’t work if it doesn’t resonate well with your target audience. Learn your audience first. Be sensitive to the things they really want. Your knowledge of your target market is still the best way to get shareable social media content.

Which social media content type do you prefer to post on social? Tell us your thoughts below.