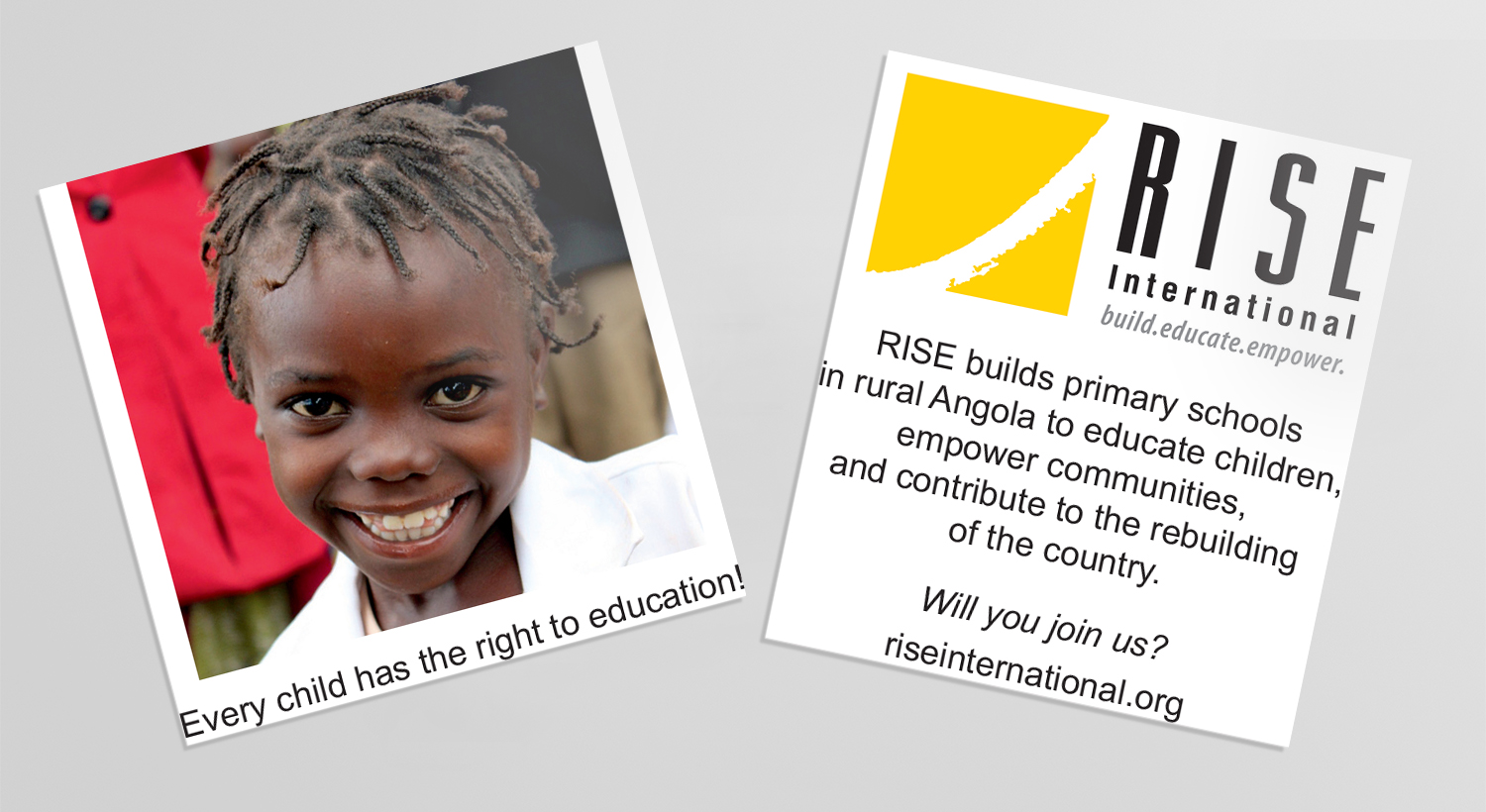 Education is a right. It is not a privilege. Over 63 million children worldwide do not have access to primary education, and more than 2 million live in the war-torn country of Angola, in southwest Africa.

Every child has the right to education. RISE International works to give children the chance to go to school in areas where accessibility is limited or non-existent. The objective is to provide the building where learning takes place for children who have been affected by years of war and its aftermath. The organization targets hard-to-reach, vulnerable and marginalized children that are living in poverty and suffer from multiple barriers to education, including lack of food, healthcare, infrastructure and clean water. Some hold school in makeshift classrooms, some under trees and thousands have no school at all.

RISE International’s Executive Director, Lynn Cole, shares more about their part in giving children in Angola the chance to go to school.

Can you tell us what your organization is about? When did it start?

“RISE International has been building schools in Angola since 2003. RISE builds primary schools in rural Angola to educate children, empower communities and contribute to the rebuilding of the country. Bringing the opportunity to receive an education to thousands of children, RISE embraced a dream to impact Angola through education – one child, one classroom, one school at a time. RISE has been building schools in Angola since 2003.”

How big is the organization today?

“Since 2003, RISE has built 170 rural schools, providing the opportunity for education to over 120,000 children each year. The greatest achievement lies with the lives impacted, the children who are now in school, and the ripple effect in their families and communities. The tangible accomplishments, those measurable pieces, represent the efforts of many schools, churches, individuals and groups working together, both in the U.S. and in Angola. The intangible impact in the lives of those on both sides of the ocean is beyond measure.”

How serious is the issue with education in Angola? Why should people get involved?

“The 27-year civil war left a generation without education, unable to read and write. Education is the driving force behind any strong economy and a key factor in social and economic growth and well-being. It is estimated that about 2 million primary school children in Angola are out of school, so the opportunity to impact individuals, families, communities and an entire country is significant.”

What are some of the activities you do to bring attention to your cause?

“We communicate regularly with our individual donors through email, postcards, letters, social media and events. We host annual events (Annual Benefit, Brewery Tour) to bring people together to celebrate the work that has been done, and to vision cast about the opportunities to stay involved in the future. We also have individuals who participate in half-marathons, marathons, and other races as a way to fundraise for RISE.”

What can people do to help?

“There are a number of ways people of all ages can donate or fundraise for RISE to help send kids in Angola to school. We have created an easy on-ramp for families with small children who can use our children’s book to learn about the similarities and differences between kids and education in the U.S. and Angola.”

“An easy next step is for kids to do a coin or dollar drive to raise money. We encourage people to join TEAM RISE and participate in local races to raise money. Each year, we have people run local half-marathons and the Bank of America Chicago Marathon. Of course, people are welcome to donate directly at riseinternational.org/donate.”

We encourage people to join TEAM RISE and participate in local races to raise money. Click To Tweet

Gratitude to Those Who Give

We’re grateful to have been a part of RISE International’s efforts to equip children with education. Lynn expounds how NextDayFlyers helped them reach out to their donors:

“We have used NextDayFlyers a number of times, most recently for a set of postcards to send to donors. The postcards were used as thank you cards to all donors who had helped contribute to a school that recently opened in Njele. We loved being able to use a great photograph of a child who is now in school because of the generosity of individual donors and show them that their donation is making a tangible difference in children’s lives!”

Do you need to print your own postcards? Visit NextDayFlyers today!

RISE International found the site easy to use and that it provided options that made sure their message was communicated clearly:

It’s an honor for us to have helped RISE in their efforts to provide thousands of children the immeasurable value of education. We wish only them the best as they continue the challenging but fruitful effort of empowering the young people in Angola. If you want to know more about RISE International’s continuous efforts, check out their website and their social media pages:
Website: riseinternational.org
FB: @riseintl
Instagram: @riseinternational

Do you want to share your NextDayFlyer story? Let us know. Email us at blog@nextdayflyers.com