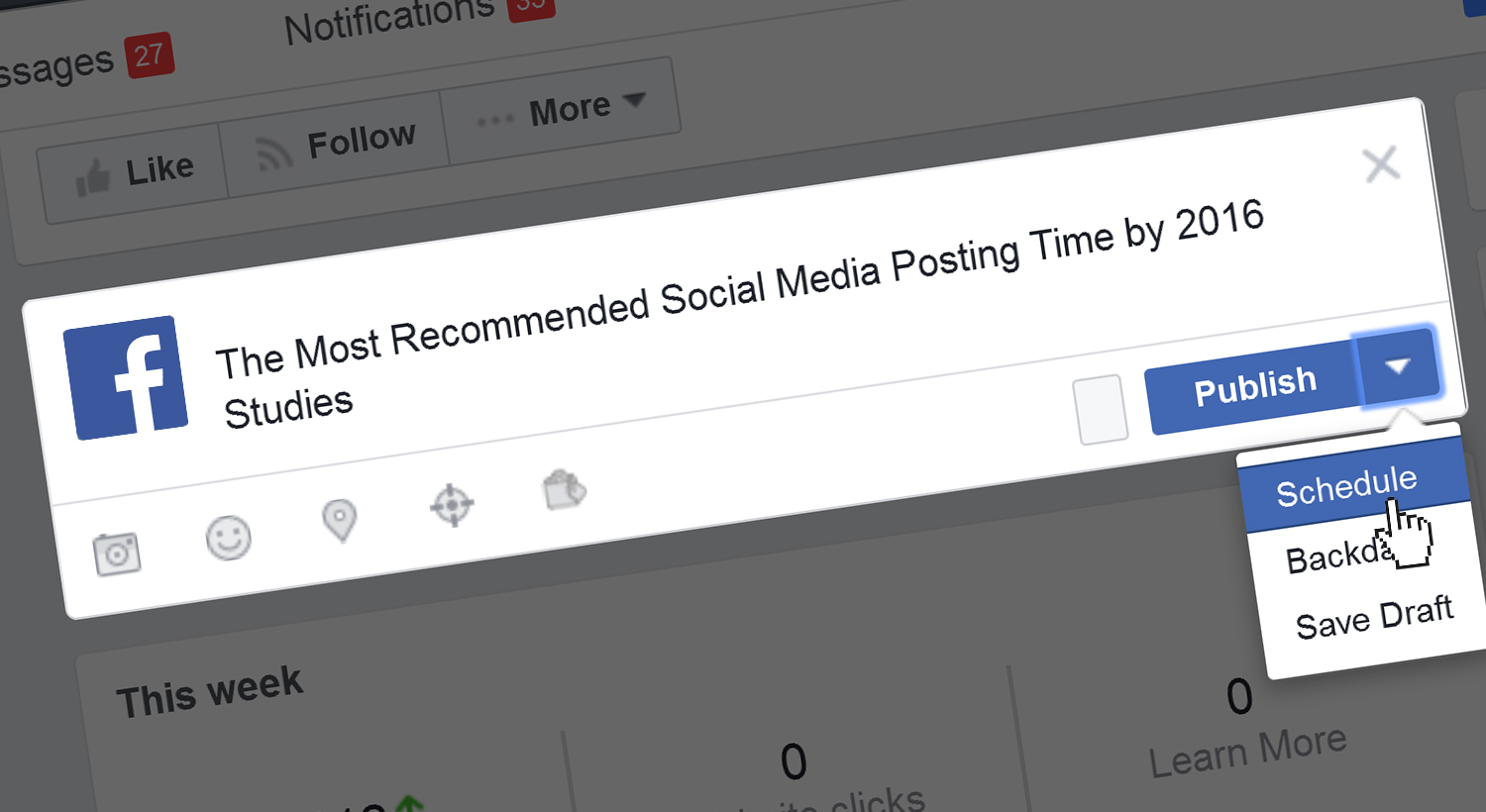 The Most Recommended Social Media Posting Time by 4 Studies

In 2018, studies estimate, there will be around 2.67 billion social media users around the world. 68.3 percent of internet users were also social media users.  Both of these figures are expected to grow in the coming years.

These are large numbers indeed, but it doesn’t mean that you can approach social media posting time head on with no particular strategy in mind. The most important factor in determining the best time to post on social media is your audience. If none of your target consumers are online to see the content you produce, then there is no engagement.

Luckily, your target consumers are governed by a specific time pattern that you can use to your advantage. A lot of social media studies in 2016 analyzed these patterns in order to find the best social media posting time. I’ve compiled a summary of these studies into digestible bites, ordered by social media network, to make it easier to understand.

But before we get on with it, do take note that there is no clear cut strategy on social media posting time. It depends on a lot of variables, such as the industry you are in, your target market, and your business itself. Use these studies as guidelines in combination with your own buyer persona research and social media analytics.

Marketing analytics platform TrackMaven analyzed more than 17.5 million social media posts by 17,737 brands on Twitter, Facebook, LinkedIn, Instagram, and Pinterest. They broke down the data to determine the best day and time for each social media channel. They based their analysis on the average number of interactions per post per 1,000 followers during each hour of the day and day of the week.

Coschedule used their own original data to come up with their own recommended social media posting time. They have since incorporated this data in their own social media calendar.

Buffer’s Twitter study is one of the most extensive social media posting time studies ever done, boasting an analysis of 4.8 million tweets.

Coschedule: According to their research, the best time to post on Facebook is 1–4 p.m. with higher engagements late into the week plus weekends. Their recommended posting times per day are Saturday and Sunday at 12–1 p.m, Thursday and Friday at 1–4 p.m and Wednesday at 3 p.m. To increase shares and clickthrough, they recommend posting on 9 a.m., 1 p.m. and 3 p.m.

TrackMaven: TrackMaven’s research showed that the best posting time for Facebook is Thursday at 8 p.m.

HootSuite: HootSuite’s social team found the best time to post on Facebook is between 12 p.m. and 3 p.m. Monday, Wednesday, Thursday, and Friday and on Saturday and Sunday between 12 p.m. and 1 p.m. They also noted lower engagement during weekends, although there is a significant spike on the aforementioned recommended 12 p.m. to 1 p.m. time.

The Facebook team has been actively tweaking the News Feed algorithm. Therefore, it has been quite tricky to boost organic reach. The algorithm puts emphasis on quality content and penalizes spammy social media accounts. The more frequent the interaction between your page and the user, the more likely it is for your post to show up.

As to what metrics and variables the algorithm use, we don’t know. This shows in the fuzzy results from the studies. However, we could infer from the spikes in engagement that there is indeed a pattern for it. Notice that the recommended times from the 2016 studies coincide with break times—morning break, lunch break, and afternoon break. These are the prime time slots where social media users are free to browse their accounts with a higher chance for them to notice your posts.

I’d like to note though that these time slots are quite competitive. Again, you still need to complement these guidelines with your own data on your target market in order to confirm higher engagement.

The most popular time to tweet is 12-1 p.m. while the fewest tweets are sent between 3-4 a.m. Tweets sent at 9 p.m. earn the most favorites and retweets. The fewest clicks per tweet happen in the morning, when tweet volume is high, between 9 a.m. to 1 p.m.

TrackMaven: TrackMaven’s research showed that the best posting time for Twitter is Thursday at 5 p.m.

HootSuite: With HootSuite being a B2B organization, their best tweeting time is at 3 p.m. Monday to Friday with a data set of 40,000 tweets. They also noted the lower “half-life” of a tweet, with only a 24-minute window to reach its peak, compared to the 90-minute half-life of a Facebook post.

There seems to be a discrepancy on the right time to post on Twitter but this should be expected. The Twitter feed tends to be fast-moving, especially during the high tweet volume during certain hours. Several findings of these 2016 social media studies, however, point out noon, which conforms with our pattern of breaks.

What is notable is the clicks per tweet from the Buffer research. Higher engagement during off-peak hours seems to be counter-intuitive, but in fact, it shouldn’t be. The low volume of tweets during these off-peak hours mean that your tweets have a relatively higher life on your followers’ feeds. Instead of constantly refreshing, their feeds might be relatively static. Hence, the more likely they would engage with the tweet.

Again, knowing who you are talking to should make your social media posting time easier.

Coschedule: According to their research, Instagram users have constant engagement throughout the week, with some spikes on Mondays. Any time of the day is fine since Instagram users are active throughout the day. They do recommend posting photos on Monday and Thursday at any time other than 3–4 p.m. and videos any day overnight from 9 p.m. – 8 a.m.

TrackMaven: Research data showed that the best posting time for Instagram is Friday at 7 p.m.

HootSuite: Their research team found that the best time for posting on Instagram is noon to 1 p.m. Monday through Friday. Again, there being a B2B business is a huge factor. The weekday time slots may not work as well for a B2C company.

You can never go wrong timewise, using Instagram for social media promotion. Use its constant user engagement to your advantage. Do take note of its own algorithm, which, similar to Facebook, shows posts based on the interests of users. Photos and videos with higher hearts and comments will have a higher chance of appearing on users’ news feeds. Maintain quality content that reflects the interests of your target market as it relates to your brand.