The Myth and Magic of St. Patrick’s Day

The history of St. Patrick’s Day, like many holidays, is filled with many stories, some true, some not, and some with a wee bit of magic. St. Patrick’s Day has been celebrated by the Irish as a religious holiday for more than a thousand years. Interestingly, there is no particular evidence that Patrick came from a religious family, so how then did he go become St. Patrick, patron saint of Ireland, and the inspiration for this beer-gone-green holiday?1

Apparently, when Patrick was sixteen, his family’s estate was attacked by Irish raiders and he was taken prisoner. He was then transported to Ireland and spent the next six years in captivity working alone as a shepherd. Patrick turned to his religion for solace. Then, according to his writing, a voice he believed to be God, spoke to him in a dream saying it was time for him to leave Ireland. He escaped by walking almost 200 miles and fled home to Britain. His next dream revelation came from an angel – he was to return to Ireland as a missionary. So, he began his religious training and fifteen years later, he was ordained as a priest then sent to Ireland where he incorporated traditional rituals into his lessons rather than trying to get rid of existing Irish beliefs.1 St. Patrick’s Day is the anniversary of his death in the 5th century.

But, What About Those Leprechauns?

Belief in leprechauns quite possibly stems from the Celtic belief in fairies – those teeny tiny women and men who can choose to use their magical powers for good or evil.2 Leprechauns, known for their trickery, were cranky little souls – probably because they were responsible for mending the shoes of the other fairies. But all that changed in 1959 when…
…Walt Disney released a film called Darby O’Gill & the Little People, which introduced America to a very different sort of leprechaun than the cantankerous little man of Irish folklore. This cheerful, friendly leprechaun is a purely American invention, but has quickly evolved into an easily recognizable symbol of both St. Patrick’s Day and Ireland in general.2

Well, there you go. A little history and a wee bit of movie magic. Happy St. Patrick’s Day!

If you’re looking to put a little magic in your St. Patrick’s Day campaign, check out our products with fresh Patty’s Day templates: 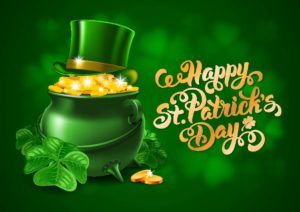