The Future of Graphic Design Software: E-readers and Tablets

Life used to be so simple. Designers created for print or the web, each had its own well-defined tools and workflows. But now designers face an overwhelming array of options for presenting information, from mobile devices like tablets and e-book readers to laptop computers and PCs — not to mention traditional ink on paper. 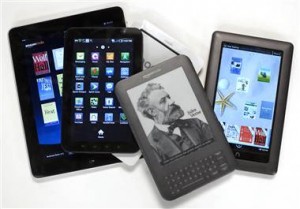 The tablets, with Apple’s iPad and the various Android-based devices, are the fastest growing segment. Newspaper and magazine publishers are ogling tablets after seeing their traditional business models eroded by the Internet. At the same time, book publishers are making new titles available in electronic versions for Amazon’s Kindle and other e-book readers.

All of this means that the future of graphic design programs will demand powerful, easy-to-use design tools that facilitate the creation of content for portable devices.

The releases of QuarkXPress 9 and Adobe InDesign 5.5, both of which provide tools for creating e-books as well as interactive digital publications for tablets are good examples of the trend that is predicted to grow with exponential intensity.

A REAL WORLD EXAMPLE: Adobe is well-known for developing and marketing software tools used for the purpose of website design, video editing, print layouts and digital publishing. Adobe’s Creative Suite is used by creative professionals such as graphic designers, photographers as well as hobbyists to create visually attractive and interesting print and online content.

Adobe is the largest player in the creative software market with about 46% market share. Its competitors include Microsoft, Apple, Quark and Corel in this market.

Creative Suite 3 (CS 3), which was released in the first quarter of 2007, was successful because of Adobe’s acquisition of Macromedia that allowed it to add Flash and Dreamweaver.

QuarkXPress 9, the first major upgrade to the program in nearly three years, will enable tablet publishing via App Studio, a plug-in previously available in the Quark Publishing System. It provides features for adding videos, slideshows, audio clips and other interactive elements to layouts, and also includes a free previewer app that helps test how a publication will appear on the tablet device. It will be available first for the iPad but will eventually support Android as well.

Adobe is making its own play for tablet and e-book publishing with InDesign CS 5.5, which the company announced as part of Creative Suite 5.5. A new Overlay Creator panel lets interactive elements be added to layouts.

As with App Studio, the Digital Publishing Suite won’t require coding skills, but it’s clearly aimed at medium-to-large publishers. In addition to conversion and distribution services, it includes e-commerce functions for managing single-issue sales and subscriptions, along with tools for analyzing folio downloads, such as how readers interact with content and advertising.

There are many driving factors behind the growth of graphic design software market.

It is estimated that the number of software licenses sold will grow from 5.7 million to 7.6 (an average annual growth rate of around 4 %.) It is easy to make the assumption that Adobe will continue to dominate the market.