Home » Business » Business Offline » Know Your Customer: The Myth of the Male Shopper 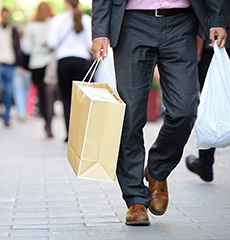 Know Your Customer: The Myth of the Male Shopper

Contrary to popular belief, men are shopping more than ever. According to Bloomingdale’s fashion director Kevin Harter, in 2001, 64% bought their own clothes; nine years later that number had grown to 84%. Other research shows that about 33% of the primary grocery shoppers are now men. Yet, sadly, 40% of men surveyed felt unwelcome in retail stores.

How can brands and retailers satisfy their male shoppers’ needs? The stereotypes no longer apply. It’s important to understand why men shop. Hopefully, insight can be gained from the following five male shoppers’ motivators:

1. Men need to “WIN” at shopping.
Men like doing things they can do well. They hate doing things they aren’t good at. Men have not had the opportunity to learn how to be good shoppers. By empowering male customers to demonstrate mastery of your category, he will feel like a conqueror.

EXAMPLE: Amazon enabled men to master buying music. Consumer reviews and lists provide the information required to feel confident about his choices. And the recommendation engine gives him the feeling that he is discovering new music, a key part of feeling like an expert music shopper.

2. Men substitute performance for emotional justification.
Men want to know how products perform. Performance provides a kind of “emotional rationalization.” It helps men feel that their choice is smart thanks to greater efficiency, higher power or technological advancement. Higher performance is the way to a man’s heart.

EXAMPLE: Dyson focused on powerful suction and great design, turning the humble vacuum cleaner into an object of desire for men; it’s more of a power tool for carpet than a domestic cleaning aid. Surveys reveal that when a couple buys a Dyson, more than 50% of the male partners reportedly want to take over vacuuming duties.

3. Men don’t browse, they carry out reconnaissance.
Men have evolved from primitive hunters, so when they find themselves dropping by a computer store or surfing through 3-D-TV reviews online, they’re not browsing – they’re carrying out a reconnaissance mission. Men seek out expert advisers and technological proof during their research.

4. Men want products that signal their progress in the world.
Remember, in the animal world, it is the male of the species that wears the most colorful plumage. Over half of the Gen X men surveyed expressed a preference for brands that “show I have good taste.” Similarly, men are more likely to seek out brands that offer exclusivity; have market-leading position; and suggest to others that they are successful. When shopping, men look for proof of quality and their good taste in the details. They connect with stories of craftsmanship and provenance that help to demonstrate their discernment.

EXAMPLE: More and more men are opting for the world of the bespoke suit and dress shirt. While more costly, these items are the ultimate way for a man to feel special and like a unique individual.

5. Men want a place where they can be men again.
While men are happy living in the 21st-century, gender-blurred world, he yearns for the simple masculinity of the past. When it comes to shopping, the majority of men still do not view it as a leisure activity, perhaps because it still carries connotations of femininity. Yet the resurgence of traditional barbershops suggests a boom in retail experiences that create a sanctuary for maleness.

EXAMPLE: Many cigar shops hold evening events that, while technically open to both genders, are a haven for men to associate with other men in an atmosphere that harks back to the traditional English men’s club.

One thought on “Know Your Customer: The Myth of the Male Shopper”