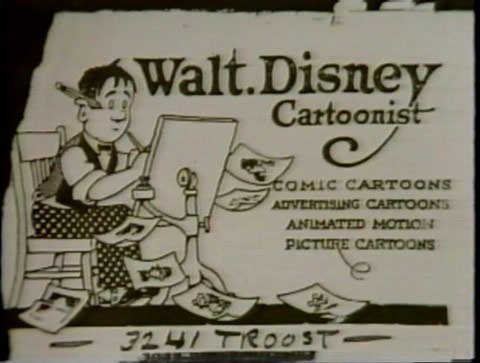 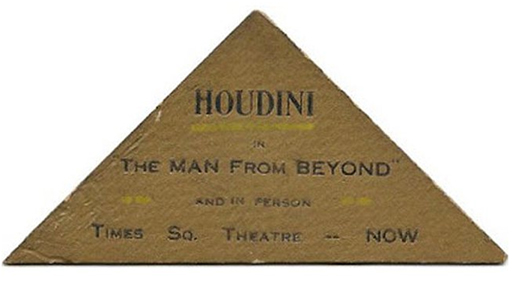 Houdini never did anything “ordinary”. This extraordinary American’s business card mirrors his love of the bizarre and the unique. At a time when everyone’s calling cards were printed on square white paper, he just had to have a pyramid shaped card in reference to the mystical and ethereal. A man before his time. 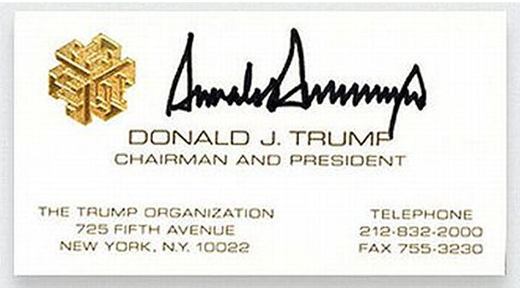 A golden logo adorns this business card from the ostentatious magnate, Donald Trump.  Would you expect anything less from this outspoken corporate leader? 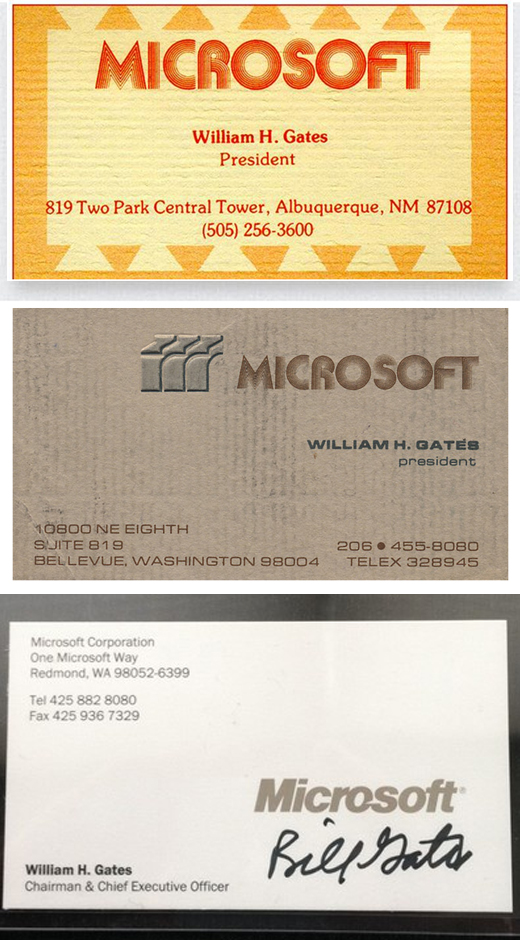 Bill Gates is an undeniably brilliant American and his business cards reflect his transition from innovator to corporate head. These three different eras’ of business card show his personal and company progression from the exciting and psychedelic “tech hippy” design in the early 80’s to the super-clean and corporate design from recent years. 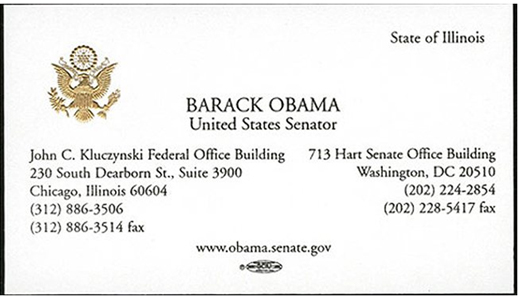 Our Commander in Chief’s business card before he became President. Our 4th of July post would surely be incomplete without Barack Obama’s business card. 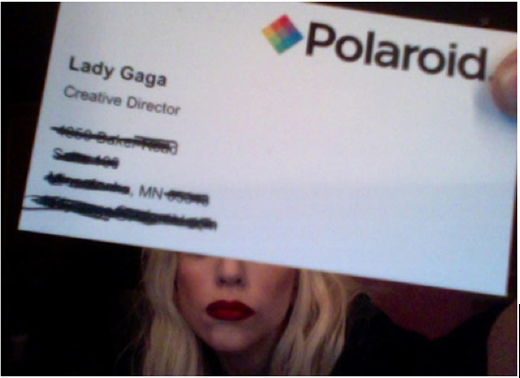 Lady Gaga’s business card. Much like her, it’s an original and strange affair in which she joined the Polaroid team in an effort to restore the popularity of the world famous brand. As usual, Lady Gaga has left us all scratching our heads but there’s no denying her kooky brilliance and creativity. 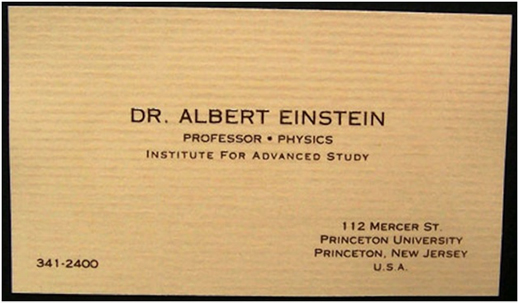 German-born Albert Einstein became an American citizen in 1940. His effect on America, science, culture, and the way we view our world is significant to say the least! This is his business card: simple, practical, and wholly scientific.

Here’s Walt Disney’s business card, pre-Disney Empire. This business card image of a lowly, struggling animated artist is proof of the American dream and evidence that anything is possible in this great country. 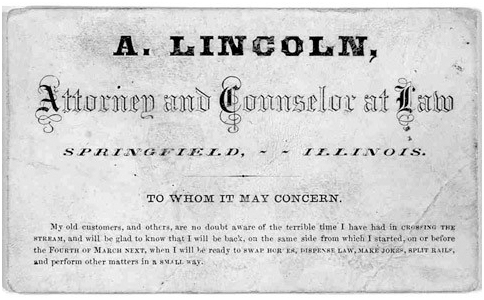 This pre-Presidential business card from one of our most important Presidents is a real treasure. Many people have an opinion of Lincoln as a sober and stern individual but this business card attests to the great American’s sense of humor: “I will be ready to swap horses, dispense law, make jokes, split rails, and perform other matters in a small way.” 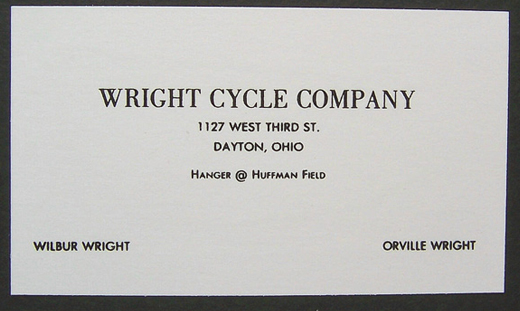 This business card from Wilbur and Orville Wright, the founding fathers of flight is surprisingly modern in its design simplicity. We would expect nothing less from these genius designers who started out as bicycle makers and ended up as two of the most important people in modern history who made air travel possible. 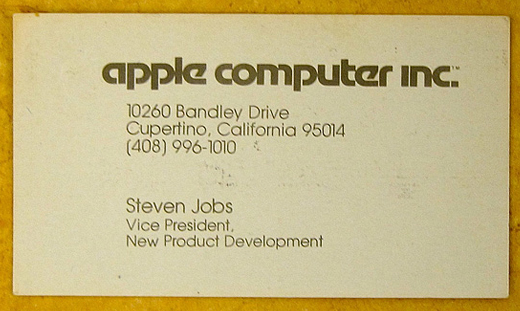 A business card from the late, great Steve Jobs. Although it’s from earlier in his career, it’s surprisingly modern in its design and sophisticated font usage – something that has always been a trademark of Apple.  A truly great American and technological pioneer. 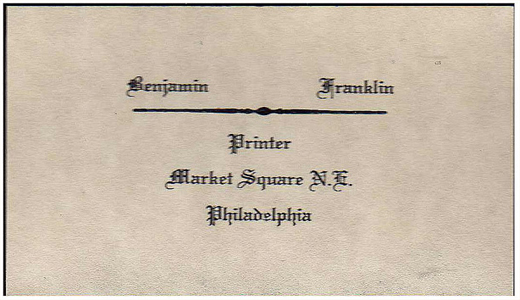 This is a really early business card from founding father, inventor, scientist, Statesman, satirist and printer, Benjamin Franklin. As a printer, he produced the Pennsylvania Gazette with illustrated news stories as a way to bring news to the common man. Benjamin Franklin was a true “Renaissance man” and arguably the greatest American of all time! 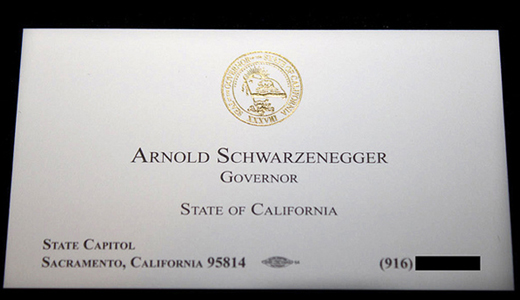 This is Arnie’s business card when he was the Governator of California.  Arnold Schwarzenegger is another of those Americans who was not happy doing one thing and pushed himself to achieve greatness. 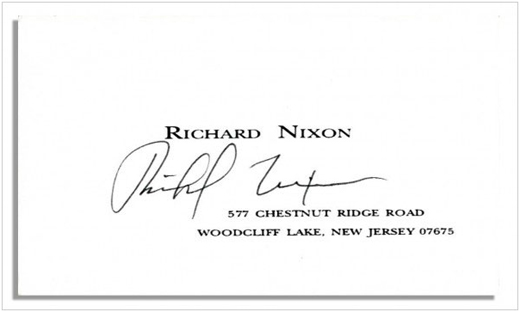 Here’s a business card from one of America’s more controversial Presidents.  A sharp font and wonderfully simple design hides the true nature of this highly complex and complicated individual that, love him or loathe him, was a major figure in our history. 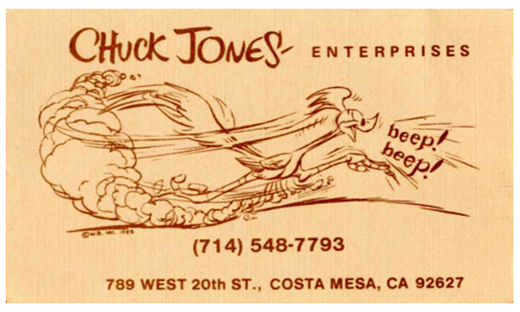 Beep! Beep! Move out of the way for Chuck Jones’ business card that’s speeding into view!  Chuck Jones was one of America’s greatest animators. His illustration and storytelling skills have influenced generations of animators, advertisers, designers, and filmmakers. 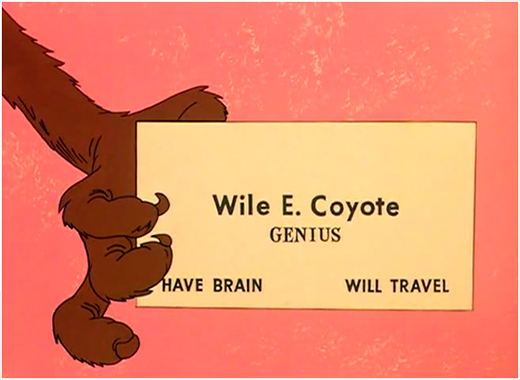 Now that we’ve just shown a Roadrunner business card, it’s only fair that we show you Wile E. Coyote’s business card. A genius inventor, Wile E. is best known for creating rockets that crash into mountains, setting traps that end up trapping himself, using dynamite to blow himself up, and surviving falls from the tops of mountains. Wile E. is another of those great American’s who never gives up, and never stops trying to achieve his goal. 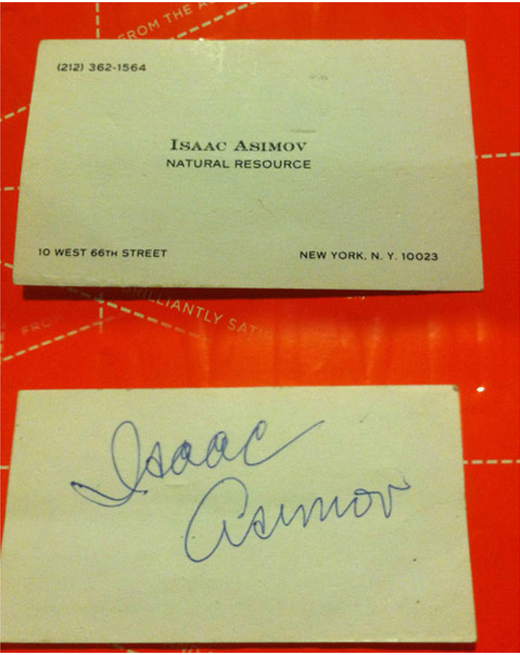 Isaac Asimov was one of the pioneers of science fiction literature in the US and one of the great scientific thinkers of his generation. Judging by his business card, which cites himself as “natural resource,” he was clearly modest about his achievements. He also had a great sense of humor and the ridiculous. 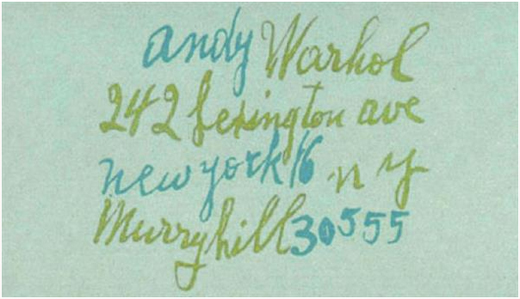 Unsurprisingly, this is a beautifully-designed business card from Andy Warhol. His hand-created font  looks as fresh and modern as any you might see today. A true art and idea innovator, Andy Warhol was the greatest artist of the 60’s generation and celebrated American culture both critically and with iconic adoration. 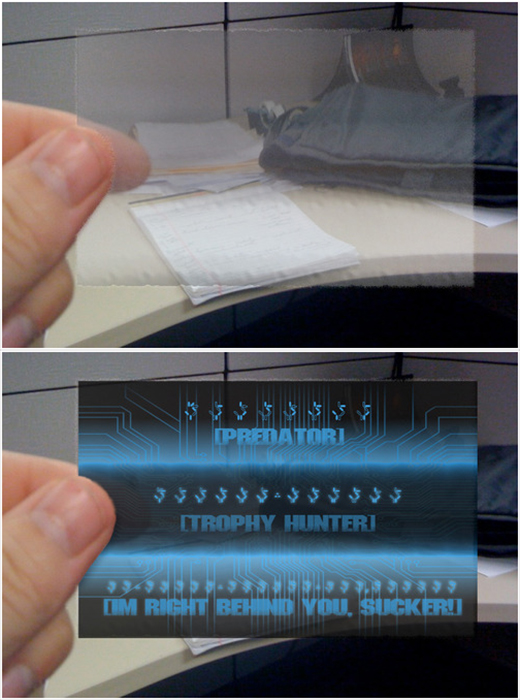 Last but not least, here’s a business card that’s not entirely American and more alien in origin! Celebrating one of the great American action films of the 80’s, this Predator business card gives me the willies! (Whisper) Don’t look now, he’s behind you!